How Google Is Changing The SEO Goalposts

The Old Days Of The Internet

Google has become the best search engine in the world. This was mainly due to the fact that it could consistently deliver a search result for people that satisfied their search query. It has been no secret, that they placed a huge amount of importance on backlinks…or for those untechy nerd types…links that come back to a website.Google believed that these backlinks were like votes for a site. The more votes a site had, the popular the site was…in theory.

Now over the years, Google has tweaked their algorithm constantly. Reports indicated they do it in excessively of 300 times a year. They are constantly trying to improve their search engine and that is great for the end user. Recently, there was a massive change that put the SEO world in a spin. This change was called the Panda update and this update was designed to give even better results in a search engine query. Matt Cutts, the lead engineer indicated that the update was designed to get rid of the spammers and the junk that can populate top search engine results.

However, what was still no secret was the fact that backlinks can elevate a site or page up a search engine ranking. The thing with this is, backlinks can be manufactured. People can use programs or subscribe to services that manufacture backlinks to artificially elevate sites up the rankings. Google has been aware of this for quite some time and they have been trying to come up with a solution.

It may very well be, that Google's largest competitor, Facebook accidentally discovered the answer to their problem. Facebook's like button has been hugely popular, and by simply clicking the like button, a vote can be made for for something that people like in Facebook.

Now Google have recently released their equivalent, Google+. This is Google's answer to Facebook's like button, but they are now going to go one step further with the Google+ button. We are now beginning to see the +1 button beside search engine results and this is a way for us as searches to ‘vote for the results if we like them as well'. Google are going to integrate the social aspect of their Google+ platform with their search engine results. Now this will be Massive. Google are now going to be using their own tools, Google+, Google Profiles, Google Maps, Google Places, Youtube and tie everything in together.

Now, the biggest problem on the internet has been the identification of original content. As in, who is the original author of content from a site. Well Google are now going to combat this problem using their own tools. If you have a Google Profile, which is free by the way, you can integrate that profile with your website and any other content on the web…your facebook page, twitter and any other sites using a new code called the rel=”author” code snippet in your website content. You can tie this into your Google profile and also your Google+ account if you have one, which I would recommend everyone get one and Google will now start showing an image beside the search results to identify you as the author of that content. 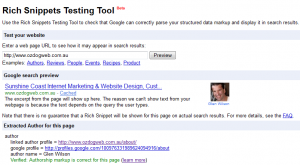 This…is MASSIVE. This will eliminate the duplicate content and spamming that is going around the internet and this can establish you as an authority in your niche on the internet. This implementation has only just begun…as of this week..but make no mistake, this is going to change everything online. And those that begin implementing this change….embracing this change will definitely reap the benefits in the future.

Well, the first thing we have to do is set up our sources of content so that Google knows that it is authoritative and that it can be syndicated. If you create original content and use the tools that Google supplies, we will all be in a position to be able to have more of a presence online and also have it be seen by so many more people using social media. Not only that, we are also able to curate content. What is that you ask? Well, that is the ability to use other content but syndicate from your portals that will also be able to establish yourself as an authority in your niche.

Make no mistake, this is the future of online marketing…and it is exciting because this is what Google wants and you will be rewarded if you give them what they want.

In my next post, I will show you how you can set yourself as an online author and for Google to begin making you standout online with your content and your website.

CLICK HERE to find out how to do it.